Sol LeWitt Wall Drawing #63 at the Art Institute of Chicago

For the month of November, I was hired to help draw Sol LeWitt's wall drawing #63 on a wall of the modern wing in the Art Institute of Chicago. We met Monday through Saturday, 9am to 5pm, for four weeks of non-stop drawing and pencil sharpening. I worked with a man from the Sol LeWitt estate, who travels the world installing these drawings in museums and rich people's homes. There was one other assistant (aside from myself), a recent MFA graduate who used to be Rikrit Tiravanija's assistant. 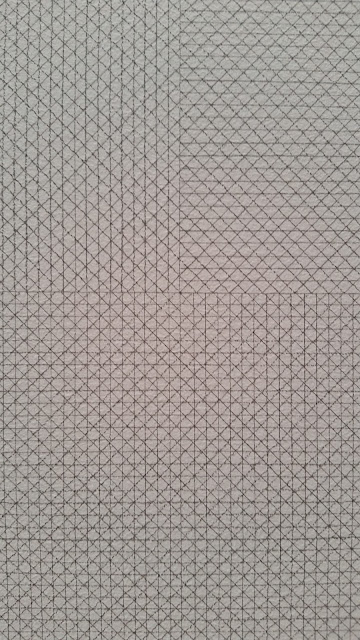 detail of the wall drawing

The boredom was excruciating. We talked about everything we could think of-- our families, our childhoods, things that embarrassed us, favorite movies, secret food shame, things we stole, times we cried, worst jobs, best jobs, injury stories. I wondered aloud that maybe some future generation would invent some kind of technology that would allow them to read these conversations, that some trace of the things we talked about were somehow embedded in the wall. I learned something about myself-- that I only have about 100 hours of stories. After that, we had to talk about things we saw on the internet the night before. 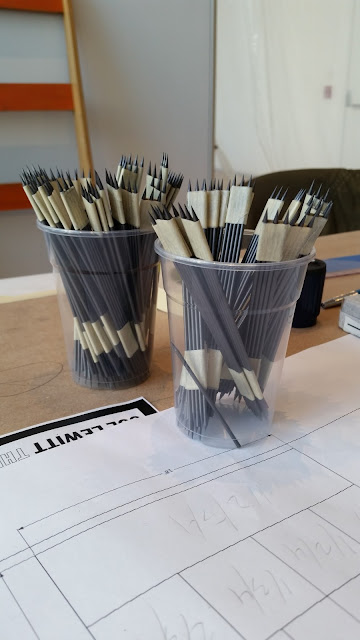 We could draw three lines at a time with these carefully assembled 6H drawing leads.

We used a plumb bob, string, and a level to establish the perimeter of the drawing and then carefully filled in each section with a specified combination of horizontal, vertical, or diagonal lines. Two people would hold the ruler and mark where the lines would go and the third person would connect the dots along the ruler. The person drawing could make three lines at a time because we used sharpened 6H drawing leads that were perfectly spaced and taped together.

I was amazed at the precision demanded by this project, the way we had to prepare the wall, the exacting way the drawing leads had to be sharpened and assembled. Even the masking tape on the drawing leads had to go in a certain place. With just the tiniest imprecision or sloppy measurement, an eight foot line could quickly veer to the left or to the right. As hard as we tried to be perfect, it was impossible. We had to stay focused on our task the entire time and constantly correct for our mistakes.

It was pretty much just this for four weeks.

I noticed odd things while working at the museum. This new bright airy modern wing was surprisingly dusty. Museums seem like such clean places, but since our roped off section wasn't regularly vacuumed, the dust piled up like crazy. We worked right by a large staircase and I was surprised at how many people regularly tripped or fell down the stairs. At least one out of every 500 people on this well traveled staircase fell. I'm not sure if this is commonplace or if these were just poorly designed stairs. Every warm day, we would look out the window for the sunbather in the park. If we saw Jerry we knew it would be a good drawing day.


We were lucky enough to get to visit the museum storage and see all the work not on display. We saw an unverified Alexander Calder sculpture of a bull. It had a large penis and when you pressed the head down the penis bobbed up and down too. I learned some things about Sol LeWitt that I haven't heard any where else. I learned he was stoned all the time and that he first came up with the idea of having other people do his drawings because museums wouldn't pay him to come out and do them, but they would pay a third party. It became a way to toss a good job to his friends, some of them making careers out of being Sol LeWitt draftsmen. 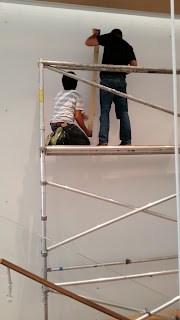 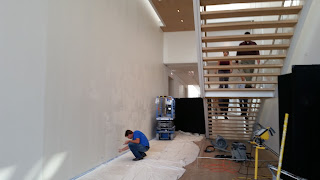 I met some wonderful people and saw the inner workings of a museum and I now know this drawing inside and out. It's still not my favorite kind of work, but I feel more confident in expressing that opinion. It's subtle work, hard to actually look at, and almost impossible to photograph. When I look at it, I can see all the floaty dust in my eyes, making me aware that I am looking and aware of my eyes limitations. Personally, I'd rather look at the John Currin or the Gerhard Richter paintings around the corner, paintings that are generous and celebrate just how much we can see. But still, I'm honored to have been a part of this project and feel a sense of accomplishment and pride.

Thanks for this post, I recently studied this art at the Museum for a school paper I had to write. Really cool knowing your thoughts on this.